To be published in ArtUS in January, 2010

The young Romanian artist Mircea Cantor, currently living and working in Paris, has become internationally recognized after some important museum exhibitions and representation with the prestigious Yvon Lambert Gallery.  So, as I was walking into the Kunsthaus exhibition “Tracking Happiness” expecting to see a considerable amount of work and even some monumental, I was surprised at the small space and almost undetectable installation.  The show features five works commissioned by the museum: two videos, and three object-based pieces.

The eponymous main video is projected on the large back wall of the gallery, engulfing the majority of the space, as viewers move back to be able to experience the entire area of the screening.  The well-produced video features a choreographed dance, set to hauntingly minimalist music composed by the Romanian Adrian Gagiu, performed by a group of eight women. They are all wearing the same white dresses, on a white background of white sand and white walls, holding beige straw brooms, and revealing small areas of pink skin.  They dance in a circle, each one methodically and ritualistically sweeping over the footprints left by the woman ahead of her, rhythmically moving to the echoes of Adrian’s composition.   The futility of our temporary impact in the world is clear– it can be easily erased, and trace of our existence can easily disappear.  But the subtext intended here, according to the curatorial statement, is that we live in a world that records our every move, tracks our lives through cameras, credit card and electronic data collected on the internet, which can all be quickly erased and with it the evidence of our existence.  This very specific meaning though, gets lost in the poetic and atmospheric choreography.  A more philosophical and general meditation on the ephemeral nature of our own marks seems more appropriate. 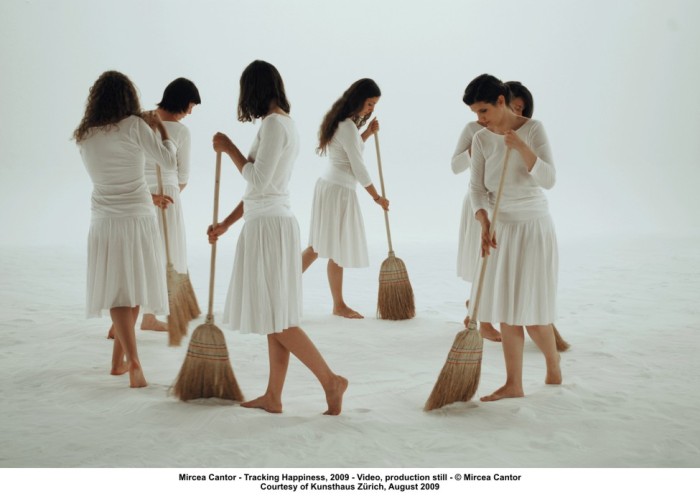 (For a complete recording of the video, click here )

The second video, Vertical Attempt, is much less complicated. A flash of a scene that lasts one second on the screen of a small TV laid on the floor in a dark corner of the gallery space reveals a child sitting on a kitchen counter trying to cut with a pair of scissors the stream of water coming out of the faucet.  Then darkness for seven seconds. And again the scene. If you catch it, with its nuances and details, then you have experienced it.  If not, you might feel confused about its connection to the rest of the show, like I did.  But persistence won over, and I watched it several times to finally feel its humor, and see the futility of the child’s experiment.  Its placement in the gallery suggests that it might not be considered as important as Tracking Happiness or the other pieces, but with better positioning, this short yet strong piece can leave an impression.

An extremely small painting, Angels and Satellites, is hung on the wall opposite Tracking Happiness. We see the earth in the middle of the canvas, as if from a great distance, surrounded by angels and satellites, both acting as surveyors of our moves and lives.  Although  angels are usually welcomed, yet satellites evoke our fear of loss of privacy, both orbit the earth, watching us from up high.

Like a Bird on a High Voltage Wire, a large-scale sculpture of what looks to be an abacus, stands lit in the middle of the room.  On closer inspection one sees that instead of beads, the abacus has spoons hanging on the wires, creating a pattern of two back-to-back isosceles triangles, one of wooden spoons, and the other of metal.  Cantor explains that this piece deals with the lack of true freedom of movement that we experience in a world that continues to track our every step, as the spoons, much like birds that get electrocuted from a high voltage wire, remain attached.  Leonard Cohen’s melancholy lyric resonates with the piece and with the show as a whole: “Like a bird on a wire…I have tried in my way to be free.”

3 thoughts on “Mircea Cantor at the Kunsthaus”