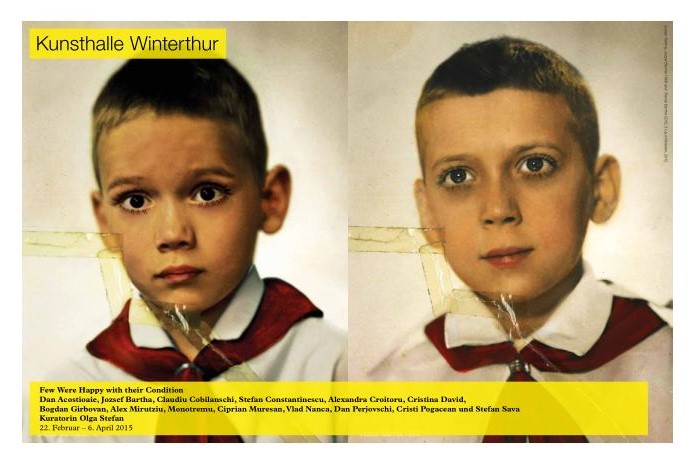 This exhibition travels from Kunsthalle Winterthur to Motorenhalle, Dresden and Gallery 400, Chicago, IL.  Each iteration features a slightly different roster of artists, while the Chicago stop is accompanied by a film festival featuring Romanian shorts.  A slightly different brochure is produced for each show to reflect the respective program.

For photographs and documentation from the show, click here

Few Were Happy with their Condition explores life in post-communist Romania, a time of hope and huge disappointment, with the transition (towards what?) seeming to continue forever, where neoliberalism and communist-style corruption and methodologies clash and mirror each other constantly, where the young generation is still trying to carve a space for debate and critical analysis in art and life and position itself against its nation’s past but also the West, thus attempting to create a new contemporary identity.

The show focuses on feelings of discontentment within the context of contemporary society, vis-a-vis Romania’s current political climate, its dark past and ever developing social problems, but also personal narratives and meditations on life and the human condition.

The artists in the exhibition, through their use of video, film and photography, reflect the contemporary need for immediacy and urgency in expression, and the technology and preoccupations of our time. In addition, there is a tradition of criticality inherent in these mediums dating back to the 1960s when video art and experimental film were means of opposing broadcast television and Hollywood, and had a tendency to resist commodification through their deteriorating nature. 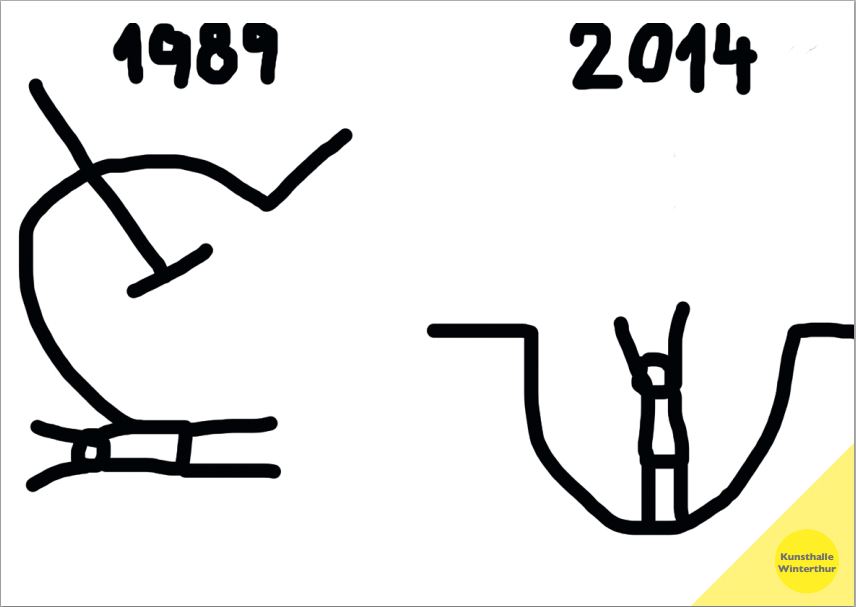 Dan Perjovschi (b. 1961, Sibiu, RO) addresses the topic of discontentment in a second part of Few Were Happy with their Condition. He combines temporary drawings which intervene onto the Kunsthalle Winterthur’s windows and glass doors and explore topical issues characteristic of the artist‘s practice with snapshots of street graffiti that has either been whitewashed or otherwise eliminated. The contrast between the two modes of mark-making highlights the duality with which we approach what we call graffiti, one sanctioned by the art world and restricted to the elite confines of the museum, while the other existing surreptitiously in public space at the constant risk of censure by the authorities controlling that space. Perjovschi explores when and how a drawing becomes a subversive act that leads to repression rather than the celebration it receives within the narrow field of art. Perjovschi’s drawings range from observations and comments on events in his own country to those happening elsewhere. They are reduced forms and text that through humor and often-times double-entendre reveal the complexity of the issues affecting our world today.

Dan Perjovschi has been the subject of solo exhibitions at institutions around the world including the Rejkyavik Museum of Art, Ludwigsburg Kunsthalle, the Royal Ontario Museum, Nasher Museum of Art, the San Francisco Institute of the Arts, Espai d’Art Contemporani in Castellon, the Wiels Center for Contemporary Art Brussels, New York’s Museum of Modern Art and London’s Tate Modern. He has participated in large-scale exhibitions including the Paris Triennial, Manifesta, Sao Paolo Biennial, and others.

Radio Interview on Stadtfilter with Dominik Dusek in English: https://soundcloud.com/stadtfilter-sendungen/rumanien-junge-kunst-und-politik

Radio Interview on Dimineata Crossover with Daria Ghiu in Romanian on 9 Feb. http://media.3netmedia.ro/player/genplayer.php?id=2&fileid=92783&s=0&p