The Wild Child of Iasi is a video produced by Olga Stefan with Daniel Spoerri especially for the exhibition in which the artist recounts of his 2010 trip to Romania searching for traces of his father, and his disappointment at the land he found. Daniel also discusses existential topics, like life and death, belonging, and homelessness, and the role art plays in the face of meaninglessness.  This is the first recording of the artist speaking of his years in Romania and the impact of the pogrom on his biography. 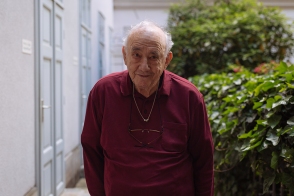 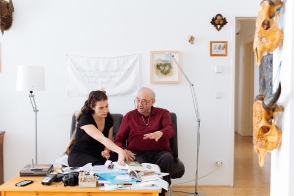 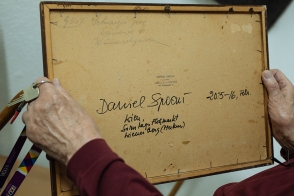 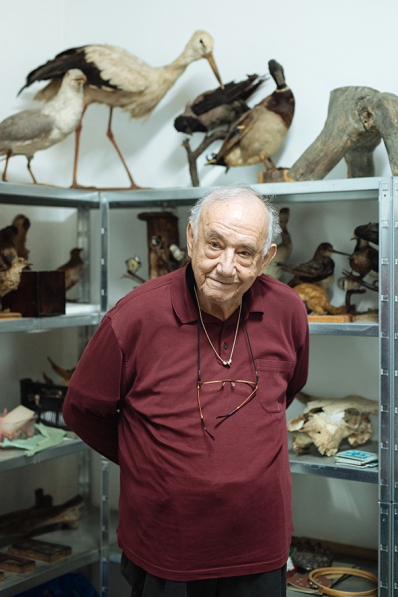 “…so he remains the most enduring”, a photograph of a 17th century coin was found by the artist in a second-hand shop featuring a stereotype of a Jew. The artist’s text explains the significance of the coin and its relationship to the marginalized status his father had as a converted Jew, denied by both communities.

I have a coin that is depicted in a catalogue of Antisemitica (baptism Medal, 17th century (!) Silver 4.3 cm), shows a forced (probably Protestant) baptism. A Jew (by using a magnifying glass, one can glimpse the obligatory “Jew nose”) kneeling at the edge of a precipice above a small creek. He has a millstone tied around his neck. Behind him is a pastor in gown and ruff, emptying a baptismal font on the Jew’s head; there is also an assistant, the sacristan (Sexton), who here becomes the servant of the executioner, because apparently the kneeling Jew will be cast immediately after the baptism into the water.
“So he remains the most enduring,” professes the text engraved on the edge of the coin.
We are witnessing a not yet completed but imminent murder, exercised by a pastor and one of his henchmen. The representation of that mockery of the precepts of humanity not only of the Christian doctrine, denounces itself.
I find it amazing that a coin could be engraved and cast in such a perfect artistic and well-crafted form. Who commissioned it? Was it offered for sale? Who bought it?
All questions to which I know not the answer.
I’ve had this coin for thirty-five years. It comes from the middle of a North German noble House, which suggests to me that it was made in this area. Also the robe and the looping ruff of the pastor close in on this region.
I am fascinated by the mendacity and inhuman perfidy which manifests itself in such a precious and durable material. It disguises itself as a silver Thaler, although a text on the back of the coin describes, in a confused jargon, just the greed of the Jews as a reason for their willingness to be baptized:

rarely a jew becomes a Christian
if so, he must have committed something
also he does it mostly for money
so he may not hang
because if he steals it from others
he gets punished too harshly
I see in this coin also references to my personal biography:
my father, Isaac Feinstein, was a Jew overtaken by the Norwegian Lutheran faith and who led a mission for the conversion of Jews in Romania.
Thus in his own person he embodied the Jew represented on the coin, as well as the baptizing Pastor with his collar and cassock.
Even the represented murder on the coin was in reality perpetrated on him, however as a mass murder in the pogrom of Iaşi, where in death trains to Podu Iloaiei, thousands of Romanian Jews were killed by Romanian fascists.
The fact that one doesn’t find the name of my father on any of the lists available today, because he was not a Jew, is indicative of his dual role. 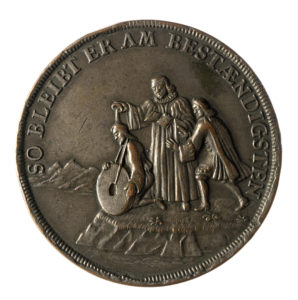 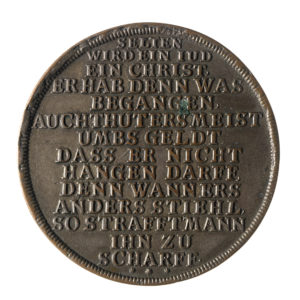 Swiss sculptor, performance artist and writer born in Galaţi, Romania, in 1930. In 1942 he fled with his remaining family to Switzerland after his Jewish father was killed in the 1941 Iaşi pogrom. Experiences in the theatre provided the background to the art that he began to produce after settling in Paris in 1959. In 1960 Spoerri became a founder-member of Nouveau réalisme. In the same year he produced the first of his tableaux pièges (trap pictures) in which randomly ordered objects were glued on to the furniture and other supports on which they rested exactly as they were found. Displaying the resulting sculpture not on the floor but on the wall, so that the objects appeared to defy gravity, Spoerri turned his realist still-lifes into pictures.
Although Spoerri continued to elaborate his methods of assemblage he also remained committed to live events such as the Autothéâtre on which he collaborated with Tinguely from 1953. By 1963 he was involved with the Fluxus movement.
Spoerri’s Musée sentimental (Paris, Pompidou, 1979), followed by similar displays in Germany (Cologne, Kstver., 1979) and Switzerland (Basle, Gewmus, 1989), enabled him to create an approximation to a museum of culture. In each case he used historical documents as a way of concentrating attention on various questions. Of what does the culture of a city consist? How can its breadth of reference – to art, religion, science, economics, legal institutions and sport – be represented? The cultural museum is interpreted as a living museum in which objects tell stories. Spoerri himself continued to be involved in numerous activities.